There is an overwhelming number of powerlifting belts on the market. Most are relatively inexpensive, but then there’s the SBD Belt.

So, you’re probably wondering if it’s worth the high price tag and whether or not you should invest the money.

Well, SBD is a well-regarded global sports apparel brand that produces some of the best weightlifting products on the market. When the company first debuted the SBD Belt in 2016, it quickly became a favorite among powerlifters mostly because of the brand’s strong reputation.

Still, it’s an expensive belt. But what makes it different?

A Closer Look at the SBD Belt

But lever buckles usually require a screwdriver to adjust the tightness which makes it challenging to use at times. The SBD Belt, on the other hand, allows you to easily adjust the buckle because it combines an easy-to-use gliding lever with prongs. It has 4 prongs that can fit into 10 different pairs of holes which is why it’s incredibly easy to adjust.

The lever also stays tight and secure, which gives it stability while doing squats, deadlifts, and other core exercises.

In addition, the belt is made from three pieces of leather that are double-stitched together. The leather is prepared for five months to make it sturdy, durable, and long-lasting. It also has a black oil finish which is amazing to look at and easy to clean.

Plus, the red suede on the inner part of the belt not only makes it comfortable to wear but also helps reduce slippage. However, the suede is prone to bleeding, and the company has even posted a warning about it.

At this time, the belt is only available in 13 millimeter thickness.

What are the pros and cons of the SBD Belt? Let’s take a look.

What people are saying

Most users are highly impressed with how well the SBD Belt is made. They also like the adjustability of the lever buckle.

However, price is a big issue with most users as they feel less expensive belts work just as well. In addition, users noted that the belt was stiff and uncomfortable to wear at first and took some time to break-in.

We researched the ins and outs of weightlifting belts from sources such as Body Building, Power Lifting to Win, and Juggernaut Training Systems.

In addition, we checked with customers who reviewed the SBD Belt and its competitors from sources such as Think Steroids, Lift Vault, AdapNation, and HeavyLiftz.com.

We also browsed user forums at Body building, Starting Strength, and Exodus-Strength to see what they had to say. Plus, we viewed reviews on YouTube from users who tried out the different belts.

The SBD 13mm Lever Belt is a high-quality powerlifting belt that is at the top of its class. It’s made of 100 percent leather and features a unique lever buckle design that makes it easily adjustable without the use of a screwdriver.

However, it’s the most expensive belt on the market and may be out of some people’s budget.

The SBD 13mm Lever Belt is only available on the manufacturer’s website. 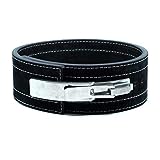 Inzer Advance Designs Forever Lever Belt 10MM Large Black
$104.95
Buy on Amazon
Inzer Advanced Designs is another highly respected company in the weightlifting world. The Inzer Forever Lever Belt is made from one piece of reinforced leather which is unlike other belts that stitch or glue several pieces of leather together.

Furthermore, the inner part of the belt is suede and stitched to the leather with corrosive resistant nylon. In addition, the lever is a high-quality metal that is adjustable with a screwdriver.

The belt comes in both 13mm and 10mm thicknesses and is competition quality but not IPF approved. It also comes in sizes M to 5XL.

However, while it’s 100 percent leather, the leather is found on both sides of the belt. It does not have suede on the inner part of the belt as the others. So, it may be prone to slippage and might not be as comfortable to wear.

In addition, the belt features a chrome lever buckle which can be adjusted with a screwdriver. And while it does have a large logo on the back of the belt, it’s burned into the leather unlike the logo found on the company’s other belts. Still, it’s a large logo that some powerlifters might not like.

The belt is 13mm in thickness and 4-inches wide. It comes in sizes XS to 5XL.

Should You Buy the Cadillac of Powerlifting Belts?


If you want a high-quality belt that will last a lifetime, then you can’t go wrong with the SBD Belt. The most compelling feature about this belt is its unique lever which makes it easy to adjust without having to take it off.

So, if you like level belts and don’t mind the price, then this is the belt to get.

Based on Features, we give the SBD Belt a 4.5 out of 5-star rating mostly because of how expensive it is.

Have you used the SBD Belt? Is it worth the price? Tell us below!